Showing posts from March, 2010
Show all

Can't get to Google.com or YouTube.com from Japan... 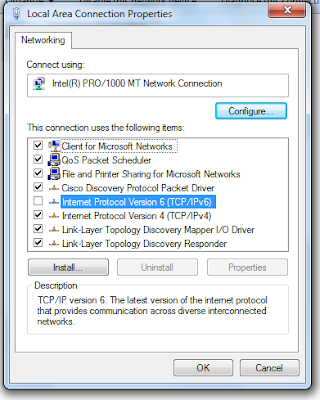 Summary: Ran into an interesting issue today.  Friend from Japan messaged me that they were having issues connecting to Google and YouTube.  I remoted into their computer and found something interesting.  Google and YouTube were resolving to IPv6 addresses. Hypothesis: I'm thinking Japan's ISP's are upgrading their networks to IPv6.  Still, I found it strange that even though Google and YouTube were resolving properly, the pages wouldn't render.  Only those people connected directly to their modem would likely see this issue, if you are behind a router, then this issue would likely not manifest. Resolution: Anyway, to resolve this issue just requires that IPv6 be unbound from the Network Adapter setting in Windows.  Below a sample screenshot from my Windows 7 VM.
Post a Comment
Read more

March 23, 2010
Summary: VMWare KB 1004667 addresses a different scenario than below. This error can also occur if a VM has issues w/ the vmxf file as evidenced by digging into the hostd.log file.  What’s interesting, the VM can be fully functional, vMotion’d, and not show a single error in vCenter.  Once you dig to find a VM is causing the issue, vMotion’ing this VM to another host, the new host begins having issues applying DRS settings. Unable to apply DRS resource settings on host (Reason: A general system error occurred: Invalid Fault). This can significantly reduce the effectiveness of DRS. Hostd.log (/var/log/vmware/hostd.log) contains messages similar to: [2010-03-22 15:13:05.285 F5CA0B90 info 'Libs'] Vix: [18420 foundryFile.c:2109]: FoundryFile_Save: Failed to open file /vmfs/volumes/volumeID/vmname/vmname.vmxf [2010-03-22 15:13:05.285 F5CA0B90 info 'Libs'] Vix: [18420 foundryFile.c:2130]: FoundryFile_Save: Failed to close file /vmfs/volumes/volumeID/vmname/vmname
3 comments
Read more

Perhaps the most useless error message on the planet, right next to PC Load Letter. [UPDATE: The workaround detailed below refers to quickprep only.  Versions 4.5 and above now allow you to use customization specifications in vCenter.  I'd recommend using those for easier administration, especially when expanding your environment.] Summary: This error message can appear when deploying View Pool from a Parent VM (aka Gold Image) that has Microsoft’s App-V 4.5 client installed: View Composer agent initialization state error (6): Unknown failure (waited 0 seconds) Workaround: On the Parent VM, change the “Application Virtualization Client” service to manual. Next steps are completely voluntary.  The only reason I went further was so that as soon as a user logs into a View session, their App-V applications would show up immediately. Create a batch/cmd file and place it on the root directory of the VM. (Commonly C:\) Open Notepad Paste the following two lines: sc con
12 comments
Read more 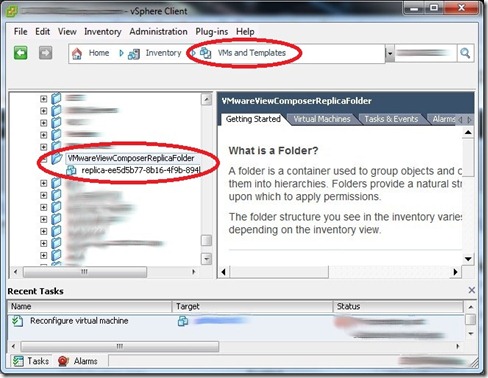 Related Products: VMWare View 4.0.1 VMWare vCenter 4.0 U1 Problem Statement: When creating a View Desktop Pool, no folder path, or datastores are presented and a whole other slew of errors should you decide NOT to grant the administrator role to the View Composer Service Account . Resolution: View Composer Role permissions need to be granted in 1 or 6 places in vCenter depending on how restricted the account should be.  1 place would be to grant the administrator role to the View Composer Service Account @ the vCenter Node Level and propagate down.  If the aim to to restrict access to one cluster/host, then the View Composer Role must be applied to the following areas: Pictures are provided as an example and are not a reflection of how all vCenter servers are configured/designed. VM and Templates – Role added to Chosen Target Folder, Gold Image Folder, and the “ VMWareViewComposerReplicaFolder ” Hosts and Clusters – Role added to Host | Cluster Datast
2 comments
Read more
More posts