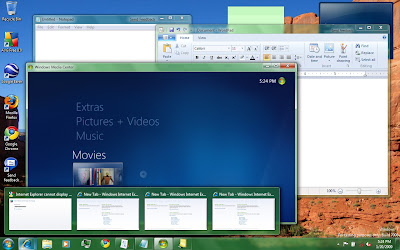 Jumping back and forth between Mac (home) and Windows/VMWare (work) has been fun for the past 2 years. If I had my choice, I'd probably dump Windows at work to exclusively use Mac. Although, I'd been reading that the new Windows 7 addresses alot of gripes people had w/ Windows Vista (I use Vista 64-bit and XP at work). So I've downloaded the Beta and installed on one of my extra laptops.

Not the greatest specs in the world, but good enough to trial Windows 7. Install was pretty straight forward, just like Vista. Once I booted into the OS, it was fast and zippy, more so than my Vista box when I first built it. The new windows explorer bar acts much like the Mac dock in that you can 'pin' your applications to it and when run it simply 'highlights' much like the Mac's 'dot'.

The one up that Windows 7 has vs. Mac is that it stacks multiple instances in that one 'pinned' app. So you can just mouse over the stack and it shows you all different instances that app. I kinda like it better than Mac's Expose, but it is essentially the same idea done in more of a Windows/PC user friendly fashion.

Much to my surprise as well as most reviewers, Windows 7 is surprisingly stable for a beta. I would highly suggest you give it a try. For me personally though, I don't think I'm quite convinced to give up my Mac and switch back to PC for my laptops/home use. Resume time from sleep is still somewhat slow in comparison to my Mac.
Windows 7