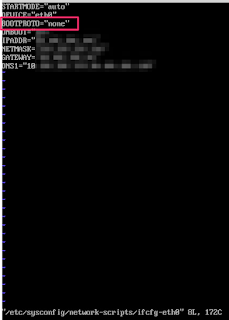 Summary:
Deployed a new Turbonomic OVA 5.8.3 for some testing.  Logged into appliance via console, ran 'ipsetup' as instructed w/ 'static' selected.  VM stayed online for about 5 min. before dying.

Workaround:
Details:
At some point it was likely that Turbonomic upgraded their OS instance, but failed to take into account a change in the OS' option 'static' being no longer a valid value and has been replaced w/ 'none'.  Seems to affect newer versions of linux OS'.  This will likely be fixed sooner rather than later.  Also Network Manager's DHCP client seems to start because of network manager and kill what existing config there is.
Turbonomic VMTurbo