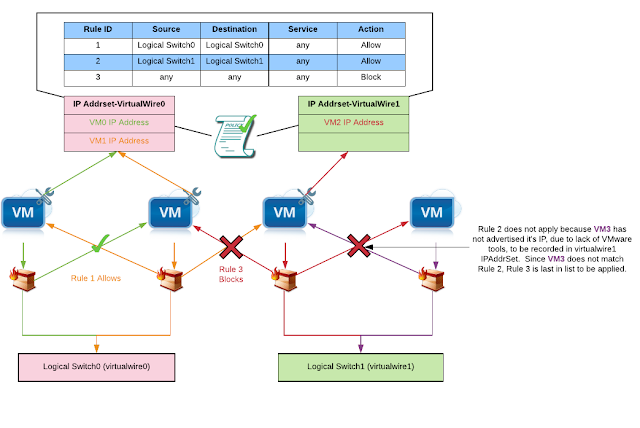 Summary:
One of the cool things w/ NSX is that you can define vCenter Objects as your source and destination targets in NSX's Distributed Firewall (DFW).  On the surface, great idea.  Under the hood, it is still based on IP source and targets.  Only when you decide upon a default deny/deny rule does this become apparent.


For my example, we decided to allow all L2 traffic.  To do so, we made a set of global rules that simply put a logical switch as a source and destination w/ any/any.  While this makes perfect sense, this only works when VM's on that logical switch are running VMware Tools.

The reason?  DFW still has to work w/ IP addresses to work properly.  So it does a clever, (clever being up for debate) little trick by simply populating an IP address set table as part of that logical switch object.  It does so by getting the IP address information provided by VMware tools.

No VMware tools, no IP address to populate a logical switch address set.

Below commands are run from NSX Manager.


You'll get a list that you can scroll through.  If the source/destination were a logical switch, you'd be looking for something like this:

If 1 of 3 VM's did not have VMware tools running or was part of NSX exclusion list, the above addrset would reflect behavior correctly.