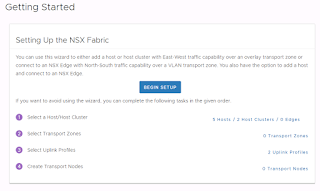 While there are a lot of differences between the two underneath, the basic setup remains largely the same.  However, know that the Manager and Controllers are now combined.  You basically have a manager/controller cluster now instead.  Basically 3 VMs instead of 4.  The biggest differences start to come into play when you begin deploying components (N-VDS, logical switches, routers, etc.) after these steps.

With both, to start, you deploy the NSX Manager/Controller first.  NSX-V was ova only, NSX-T Manager has both ova and qcow2 (for KVM) appliances.  Going to focus on vSphere with vCenter available.

After the manager/controller node is deployed is where things diverge significantly.

The key point, you could deploy NSX-T completely stand-alone without any tie to a vCenter.  Deploying to a vSphere environment does have its advantages of being 'easier'.

At this point, I'd still recommend 4 physical nics keeping your underlying vmkernel interfaces on standard or vds switches.  Quite simply, it's still fairly new and it starts to become a much more complex system to manage.  Lab setup should be fine, but I'd caution going full production w/o proper testing and training on a consolidated N-VDS configuration.
References:
https://www.vmware.com/support/nsxt/doc/nsxt_22_api.html <-- Outdated API Reference
https://code.vmware.com/apis/547/nsx-t