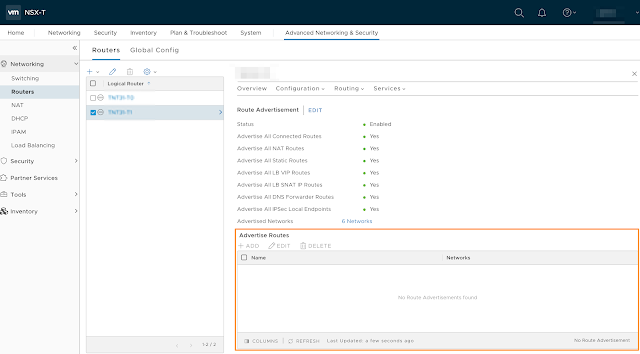 Summary:
Basically ran into a weird issue where a T1 was not advertising a very specific subnet when configured on segment.  Come to find out when looking at the advanced networking section of that T1, there was a route advertisement rule that denied that subnet from being advertised up.  Since the T1 was created via the policy API, you cannot simply delete it via UI.

Have no idea how that route advertisement rule even got there, but something tells me a bug exists.  Unfortunately have no idea how to reproduce it.
[Update: I have a hypothesis on how it got there now.  When you instantiate a DHCP server via the policy engine, whatever network you place on and attach to a T1 shows up here.  This is likely why the network was here.  What seems to have happened is that deletion of the DHCP server did not happen cleanly and left that artifact there.]

Workaround:
Long story short, you have to call the API to do so.  Here is a powershell snippet to be able to do so.